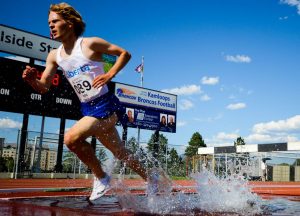 Gareth Hadfield arrived in the distance group as a U16 athlete. At that time the group was co-coached by Jason Lindsay and Christine Laverty. There were a lot of top older runners in the group at that time but Gareth did not care who they were … he was there to beat them. He had an inner desire to be the fastest athlete in the group and to take down as many of the group records as he could in his career.

All the way through his time with Caltaf he has been a strong advocate and supporter of the club. He told Christine at a very young age that he never intended to retire so she would never be allowed to stop coaching. He has been with Christine and the club as an athlete longer than most and has had success all the way through.

As a U18 athlete he made his first National Team (World Youth) after winning the 2000m Steeplechase at Nationals. At the 2009 World Youth Championships in Bressanonne, Italy, he placed 8th chasing the Kenyans to the finish line. A lot of athletes on World Youth Teams have been afraid when lining up against the Africans, but not Gareth. He was tough and ran a Personal Best that day. 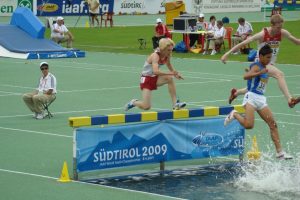 As a U20 athlete, Gareth once again made a National team, again in Steeplechase 3000m, and the team was the PanAm Juniors where Gareth raced to a Bronze Medal. The more exciting part of being on that team was how he made it. At Nationals, there were a few athletes who had made the standard so Gareth need to place at least top 2 to make that team. I was standing at the steeple pit around the 150m mark, and as he passed me on the final lap, he was sitting third. I started screaming (as usual for those of you who know me) and I saw Gareth pass the 2nd place athlete with about 25m to go. I was so excited for him and started to race for the stands to get to the warm up zone, when they announced that Gareth in fact had won the event. It was a photo finish and thus the delay in announcing the result. Who runs 3000m over barriers and then sprints a 150 of their life? Gareth. 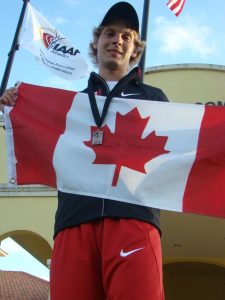 As a Senior, Gareth’s top finish was 2nd at Nationals in the 3000m steeplechase. It is a very tough event, as many who have tried it will tell you, and the field at the National level is filled with Olympians as Canada does seem to excel internationally in this event. A tribute once again to Gareth’s hard work and dedication.

Gareth’s other love through his career has been Cross Country. He has been the top athlete in Alberta both as U16, U18, U20 and Senior throughout his running career. He ended up with an Alberta Team Medal at Nationals almost every time out.

Gareth a few years back expanded his running into Mountain Running. Think about this one: Cross Country running but up a mountain and then back down. Once again Gareth got to put on the Team Canada singlet as he represented Canada at these International events.

But I would be remiss if I did not share a bit about Gareth the person. For a few years Gareth helped coach our Junior Development athletes to share his knowledge with the younger athletes in the club. Gareth, to this day, can also be seen at competitions taking pictures of all the Caltaf athletes. Not only athletes in the Distance group but also some of the athletes in other groups. His action shots that he has captured on print are amazing and appreciated by those athletes. And of course he has managed to capture a few action shots of the coaches as well. There have been quite a few times where Gareth and his Dad put together a slide show of all the Caltaf athletes and groups for our Annual Awards. He is a caring young man and modest about his accomplishments, another quality that I love about this young man. 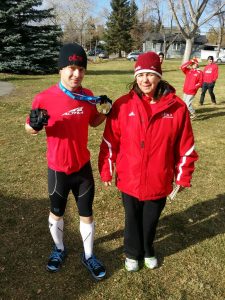 I have enjoyed having Gareth in my group and getting to work with him all these years. I am happy for him that he is finally going to get to work at Marine Life in West Edmonton Mall. Aside from running, Gareth has always been passionate about animals. He did his apprenticeship at the Reptilia Zoo in the Toronto area for a year and then returned to Calgary. He has volunteered for numerous years at the Calgary Zoo but they have continuously passed over him when a full time position there opened up. Maybe they just knew they had such a great asset to the zoo working for free!!! But now Gareth is finally going to get the start he wants in a full-time position in the field he loves.

I am sure that running is in Gareth’s blood and maybe one day he may return to Calgary and back to Caltaf. But for now, we must wish him well and send him on his way.