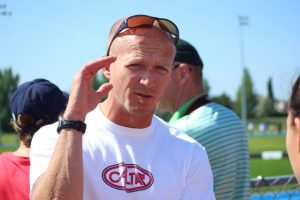 Jason has been a longtime fixture in athletics in Calgary and the Province. He has been coach to 100’s of athletes for 20 years; many of whom are city, provincial, and national champions..

Beginning as a runner in the early 1980’s with Calgary Track West (CTW), Jason competed in intermediate hurdles, steeplechase amongst other middle distance races. In the fall of 1994, Jason moved into the coaching ranks first with CTW and then moved over to Caltaf in the fall of 1999.

In 2011, Jason assumed the role of sprints and hurdles coach. In the fall of 2014, he began working with CALTAF alumni, Natasha Quan-Vie.

Most recently he lead Team Alberta on the 2016 European Tour Team to Netherlands and Belgium. Previous to that he was the head coach to the championship winning Canada and Western Canada Summer Games teams in 2013 and 2011 respectively. His first national team assignments came in the form as personal coach at the World Cross Country Championships in Edinburgh in 2008 and at the NACAC Cross Country Championships in Cape Canaveral, Florida in March of 2009.

In addition, Jason created a staple of the spring competitive season – the New Balance Athletics Series in the summer of 1996. For over 20 years, the series has provided high quality competitive opportunities for athletes that range from brand new to the latest Olympians.

Jason is a fully certified NCCP Level 3 sprints, hurdles and distance coach. Additionally, he has a B.Sc. in Geography and a Masters of Teaching Degree from the University of Calgary and is employed with Calgary Arts Academy Society where is he is the Director of Physical Education and Outdoor Program Leader.

Jason believes that through balance, consistency, patience and hard work, personal growth is possible in all aspects of life.