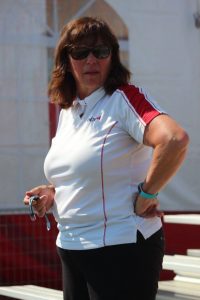 Christine Laverty’s track career began in 1969 where she raced competitively on the Quebec provincial team in events ranging from the 400m through to the Mile for over five years. Christine began coaching with CALTAF in 1999 as a junior development coach and later, in 2001 together with Jason Lindsay, began co-coaching the CALTAF middle/long distance group. In 2010, Christine and Jason split their expertise with Jason moving into the Sprints/Hurdles Coaching area and Christine continuing with the distance group.

Christine’s track and field coaching experience and general sporting involvement is extensive. After over 16 years of coaching track and field, soccer, volleyball and basketball at a regional and High School level in Quebec and Ontario Christine moved to Alberta where she began concentrating on coaching track and field. She has held many athletic positions throughout her career including Track Meet Director for the Greater Montreal Interscholastic Athletic Association (1976-1987) and the Meet Director for the Jurassic Classic Gymnastics meet (1995-2010). Her greatest Volunteer effort was in being the Chair for the Canadian National Championships for Canada in 2011 and 2012. These were the Trials for the World Championships and Olympics respectively…

On a national team level, Christine held the following positions with Team Canada:

In both 2001 and 2006, Christine was named the Athletics Alberta Developmental Coach of the Year. In 2008, Christine was awarded the George Gemer Award for service to Athletics in Alberta. 2012 was another year of awards for Christine as she was acknowledged by the Calgary Booster Club as an Honored Athletic Leader for Cross Country and Athletics, and by Athletics Alberta as their Volunteer of the Year. In 2013 she received the Sport Calgary Award of Excellence from Mayor Nenshi of Calgary.

Christine holds a level 4/5 National Coaching Certification in Athletics. She also has a BSC in Biology and Physical Education and a Bachelor of Education all from Concordia University, Montreal, PQ.

Christine loves working with young athletes and believes that sport offers every athlete an opportunity to perform and improve him or herself. Christine’s coaching philosophy also demonstrates her belief that an athlete’s only true opposition is themselves and that what an athlete puts into sport determines what the athlete will get out of it. These simple principles of sport carry over into the life skills of each and every athlete Christine works with