I would like to begin by congratulating our Provincial Champions – Jasper, Hanna and Kamila. 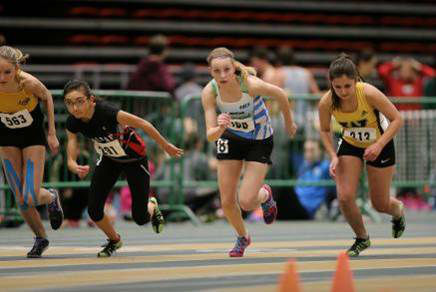 Some of the most impressive personal bests were:

In addition to those mentioned above, some of the more memorable moments of the weekend were:

Coach Ed labelled this photo, “Lined up at the spa!”

Katy Jasper Eden & Maddie signing up for a massage.

The JD athletes and coaches would like to thank Marci Rosin and Lisa Strauss for giving up their weekend to accompany the team to Edmonton. We greatly appreciate the long hours you devoted to ensuring the success of the athletes. We are most grateful.

Thank you also to the parents and siblings who traveled to Edmonton to cheer on the athletes. We are most grateful for your continued support.

Congratulations again to all athletes. Well done! What a great end to the indoor season.