Our own Jenn Brown was recently featured in a story on the Canadian Paralympic website. 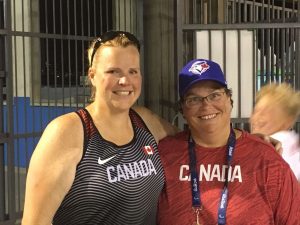 Jennifer Brown was eight years old when her hometown of Calgary hosted the Winter Olympics.

For Jennifer, it was a first-hand chance in her own city to see what was possible through sport.

“The excitement and energy which the Olympics brought to the city made me fall in love with sport as a whole,” she says.

Jennifer developed a passion – and skill –for track and field, especially the throwing events. In high school she started competing in hammer throw and continued through university where she represented teams at both the University of Calgary and University of Saskatchewan.

But in 2006, not long after finishing her degree in urban planning, the former high-level athlete found herself in an unusual position: she couldn’t walk.