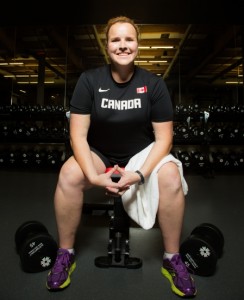 That’s when she got the provisional diagnosis of multiple sclerosis, the neurological disorder which attacks the body’s nervous system and damages nerve transmissions.

After five years of trial and error, she moved on to her next goal of finding a balance around exercise. She would start to do some workouts in the winter, but then the summer would come around and the fatigue would be too much and she would try to work out again at the end of fall.

So she reached out to her old coach, the well-known Kim Cousins who knew her during her high school years.

Read the full article on Sportsnet.

Tags: in the news, para-athletics