Here are some highlights from the meet: 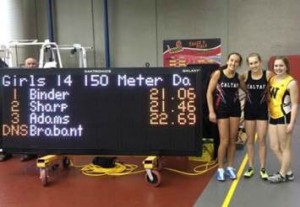 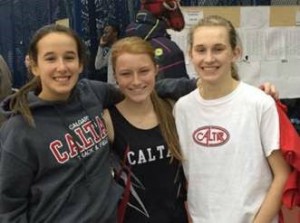 Erika, Fiona and Molly at the Dino Classic

Evan and Denise were participating in their first meet, and yet managed to compete very well. Denise was 4th of fourteen athletes in the 14 years 60m, finishing in 8.60s, the fastest 60m time recorded by a JD female athlete at the meet. Evan took on the challenging 600m, and ran very well, finishing in 1:43.79s. Well done Evan and Denise!

As usual, the coaches were watching for JD athletes who demonstrated good sportsmanship throughout the day and were pleased to note Fiona, Matthew and Alex M shaking the hands of their opponents at the 600m finish; Rebecca shaking the hand of the competitor next to her at the 1500m start; and Denise and Fiona cheering on Molly and Erika at the 60m start. Coach Blair and I also appreciated having Evan come and shake our hands at the end of the meet. We also were grateful for the leadership demonstrated by JD Captain Kamila, who led the warm-up for the 1200m runners.

I could not help but notice that some of the best warm-ups of the day were completed by two of JD’s youngest athletes, Matthew and Thomas, who warmed up thoroughly and without any supervision, for all of their events, but especially the 600m. Well done Matthew and Thomas!

A few more track records fell at this meet, thanks to the efforts of some JD athletes.

A few of my favourite moments:

There were some impressive top 5 results at the meet:

…and now some comments/observations from Coach Ed:

Sure, it was quieter than the December meet but there were highlights and emerging trends that bode well for the upcoming season.

I thought Denise Chu ran well in the 60 and 150.  Molly, Erika, and Hanna were right beside her too so look out when we do relays in February.

Again Thibaut was right in there in 60 and the 150.  That 14 year old boy age group is one where the boys are sometimes far apart in physical development, 3rd in the 60m is a great place for him to be – the fastest in our group.

Jasper is nipping at the heels of the leaders in her age class, quite a showing for an athlete who is so new to the sport.  Jasper’s in a good place.

The girls on the other hand were dominant!  Kamila ran an amazing race, showing the composure and confidence of a much older athlete.  Congratulations!  I’m sure there are many more great races to come.  Shaniah and Annika, one year back from Kamila, are real talents who have the benefit of training together in the club – so come race day they’ve already been there done that!

Rebecca ran 5:33 in the 1500 which means she can be competitive in any high school girls race.  She finished strong, I can see real potential there.

Fiona can run well at any distance but I think as she gets stronger and moves up the distance she’ll find her ideal race.

Cole’s 1:37 in the 600 is a real breakthrough.  He’s in the fastest group of midget boys in the province.

And what can you say about Matthew Fowlow’s 600.  He was in control the whole race.  Thomas was not far behind either.