Congratulations to Amanda, Grace Chalmers, Vienna, Paige, Hanna, Amelia, Erika, Tyra, Denise, Adrienne, Shaniah, Grace Lew, Annika, Eddy, Jasper, Juliette, Alex Matsuoka, Cole, Liam, Alex Oglinzanu, Evan, Thibaut, Yohan, Andrew, Scott, Adeem, Matthew and Thomas, who competed in the Jack Simpson Open yesterday. Among them, these 28 athletes produced some impressive results. At the end of the meet, Coach Ed concluded, “We are ready. I want to congratulate everyone who competed – this is an important step in our preparation.  The upcoming two meets in Edmonton in February and March will be very competitive.  We are ready.”

Here are some highlights from the meet:

I think Matthew must be trying to set a record for the number of records set by an athlete in the Calgary Indoor Series. For the third meet in a row, Matthew set a track record in a distance event, this time in the 1000m and previously in the 800m at the Dino Opener and in the 600m at the Dino Classic. In the 1000m, Matthew finished 1st of nine athletes in 3:30.45, beating the track record of 3:34.92s by 4.47s. Well done Matthew! An impressive accomplishment! Good distance genes must run in the family – Matthew’s big sister and JD athlete Corrina still holds the provincial indoor record for 14yrs and under in the 2000m. Not to be outdone by her older siblings, the youngest Fowlow runner, Karen, placed 3rd in the 10yrs and under 1000m at this meet. Well done Karen!

Given that they were competing in their first meet, I thought that Juliette and Yohan showed remarkable composure on the track. Juliette finished 4th in the 13 years 150m , holding off her nearest opponent with an impressive kick to the finish, and she was a member of the winning 4x200m relay team. Yohan ran a strong 60m, and followed it up with an impressive leg in the 4x400m relay. Well done Juliette and Yohan!

I thought the warm-ups were a vast improvement over the previous meet – not nearly as much standing around as at the Dino Classic and much better timing. I was especially impressed with the warm-up by our three hurdlers – Amelia, Erika and Grace L – and three of our youngest athletes – Juliette, Jasper and Eddy – who warmed up thoroughly for (respectively) their 60m hurdles and 60m. All six athletes then stepped onto the track and ran amazing races. Well done ladies! 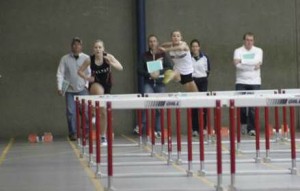 The athletes seemed very well organized – warming up when they needed to and arriving at the start when they should. Coach Deirdre agreed, noting that “I checked in most of the athletes for their races today.  No CALTAF athletes were late checking in.  They arrived on time and ready to race.  Those competing together, generally arrived as a group which indicates that they most likely warmed up together before heading to the start line.  I noticed that many of the athletes were feeling comfortable enough to be friendly with the other athletes in their heats so when they were assembled into heats and sitting on the benches, they would greet their competitors.”

Coach Ed made these very insightful comments for the athletes about competition and personal bests:

In addition to the 1000m, there were some other very strong individual performances at this meet:

Grace Chalmers finished 4th of eighteen 15-year-old athletes in the 300m in a personal best 46.42s, and was 5th of twenty-two athletes in her first attempt at the 60m, where Grace finished in 8.62s. Well done Grace!

Despite a stumble coming out of the blocks, Denise still managed to place 4th of ten athletes in the 60m, where she finished in 8.69s. Well done Denise!

In her very first meet, bantam Juliette demonstrated her speed endurance by finishing 4th of nine athletes in the 150m in 24.34s. Well done Juliette!

There was an impressive showing in the 14-15 years 60m hurdles for the CALTAF women, with athletes finishing 1-2-3 – Haylie, Erika and Amelia, while Grace L was fifth. Well done hurdlers! 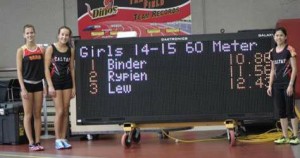 Erika and Grace Lew after the 60m hurdles

In a talented field of twenty-two 15-year-old 60m runners, Haylie, Grace C, Vienna and Hanna all claimed a spot in the top eight. Well done ladies!

Hanna, Haylie and Vienna in the 60m

Cole took almost three seconds off his PB in the 300m, where he finished 3rd of twelve 15-year-old athletes in 40.92s. Well done Cole!

The final meet of the series, after which the medals will be determined, is the Dino Indoor Challenge on 26th April.

About the relays, Coach Deidre commented, “The camaraderie in the relays is always fun to see and today was no exception.  Incoming runners stayed at the finish to cheer on the next runners, even those who had clearly emptied the tank on the home straight!”

Our 13 years and under 4x200m relay team of Jasper to Alex M to Juliette to Eddy finished 1st of three teams in 2:10.90s. The girls finished well in front of the second place team thanks to some impressive running and very smooth exchanges. Well done ladies! This bodes well for Relay Provincials in Edmonton in two weeks.

The coaches are most grateful to Liam and Shaniah for stepping in at the last minute to replace two injured/ill teammates who were unable to run the 4x400m relay. Had Liam and Shaniah not been willing to run, we would have had to pull two relay teams and disappointed six athletes. Liam and Shaniah’s offers to run the relay is especially notable given that they had both just run the 1000m, where Liam placed 2nd  and Shaniah finished 1st. A great display of good sportsmanship!

Unfortunately for our midget athletes, the 4x400m relays were run as an open event (all 14yrs+ athletes competed in one age category), with the result that the JD midgets were some of the youngest athletes entered in the event and were up against university-age athletes. However, not a group that is easily intimidated, the JD athletes used the opportunity to run some impressive 400m splits and practice their exchanges.

The younger JD men’s team of Evan to Matthew to Thibaut to John Zeng (of CALTAF’s Sprints and Hurdles Group) finished 9th in 4:23.61s.

Our youngest men’s team of Andrew to Scott to Yohan to Adeem, who were the youngest on the track, finished in 4:54.73s. About their race, Coach Deirdre noted, “ I thought it was particularly brave of the relay teams lining up and running against much older athletes.  They ran their own race and did not let it put them off.  Andrew in the 4×400, was sandwiched between two older teams (University and Youth).  We were worried for him but he just smiled and went to his blocks with confidence.”

Our ladies 4x400m teams were also competing against much older athletes but finished very well nonetheless. The team of Grace C to Annika to Denise to Erika finished 6th of ten teams in 4:32.78s. From Coach Deirdre: “The Midget Girls in the 4x400m (Grace C, Annika, Denise and Erika) were lined up in the lane beside the 16+ women’s team from (CALTAF Coach) Jason’s group and, like the boys, they did not let this stop them from giving it 100%.  Great job.” Our younger team of Shaniah to Grace L to Tyra to Adrienne also ran very well, finishing in 5:11.67s.

The crowds at the finish line of the 60m cheering and congratulating the athletes.  Lots of our kids stayed around to cheer after they had run.

The relays were great!  Even though the 4x400m were against much older teams, the kids looked poised and ready to give it their all.  The splits I saw on a previous email (and given above) speak for themselves. Great effort.

The 300m, run by Amanda, Grace C, Vienna, Paige, Hanna, Tyra, Shaniah, Cole, Liam and Evan: The long sprints are where you can see who really wants to be a runner.  It’s rare for someone to do well in the 300 or 400 without working hard at it.  Time spent in practice makes a big difference when it comes down to a race.

The 1000:  Again our middle distance group performed at a high level that is only possible when talent meets good coaching.  There are some great little runners in the group, keep working at it and you will surprise yourself with how fast you can go!  Believe in yourself and there are no limits!

Impressive results! Well done athletes! Congratulations again to all competitors! I am looking forward to watching you compete in Edmonton.