Coach Blair and I agreed that the class act of the meet was Katy. Coach Blair wrote, “Katy demonstrated outstanding team commitment with her willingness to sub in and out of relays at the very last minute to help her team.”

I was so impressed with our bantam (2001/2002) athletes this weekend – Matthew, Thomas, Katy, Jasper, Juliette, Alex and Eddy. For such young athletes, they coped very well  with all of the additional stresses and challenges that come with a big, out-of-town meet and competed very well. Clearly not easily intimidated, Jasper, Eddy, Matthew, Thomas and Katy all ran up on midget relay teams and looked quite at home amongst the older athletes. Matthew placed 3rd of twenty athletes in the 600m, finishing in 1:53.47s – a personal best of 2.46s. Jasper was 2nd of forty-seven athletes in the 60m, where she finished in 8.94s. Coach Blair commented that Juliette showed great determination in all of her events and ran some outstanding times, including a 31.2s split in the 4x200m. One of my favourite races of the meet was Alex’s 600m. Coach Blair must agree, having written, “Alex decided to emulate her big brother in the 600, taking it out very fast and showing a lot of guts to hold on at the end for a 7 second PB.” Well done bantams!

Congratulations to our Provincial Champions and gold medalists:

Our midget women’s medley relay team of Haylie Leote (from CALTAF’s Multiple Events Group) to Erika to Denise to Kamila finished 1st of six teams in 4:21.97s to capture the gold medal and provincial championship title. The girls shattered the provincial record for the 15 years and under medley relay (400m-200m-200m-800m) of 4:30.87s by 8.90s. To achieve that record, Haylie ran the 400m in 65.2s, Erika ran the 1st 200m in 27.4s, Denise ran the 2nd 200m in 28.9s and Kamila ran the 800m in 2:20.40s – all very impressive splits, especially for Erika and Denise, who are first-year midgets. Well done Provincial Champions, Gold Medalists and the new Provincial Record Holders in the midget women’s 15 and under medley relay – Haylie, Erika, Denise and Kamila – I suspect that record will stand for a while. Congratulations! In that same race, the team of Annika to Vienna to Grace Chalmers to Shaniah finished just out of the medals in 4th place in 4:43.90s. Well done ladies! 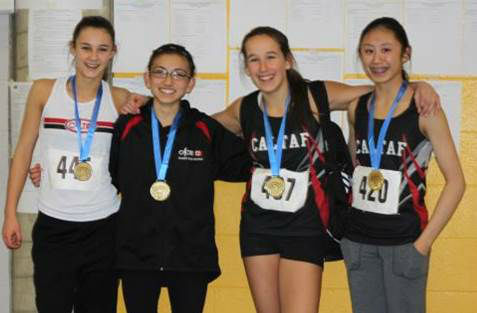 Not to be out done by the ladies, our midget men’s 4x400m relay team of Cole to Alex to JD graduates Thomas Huard (now of CALTAF’s Sprints and Hurdles Group) to Mehrdad Shokoohi (now of CALTAF’s Multiple Events Group) captured the gold medal and provincial championship title by placing 1st of four teams in 3:51.87s. The boys ran impressive 400m splits, with Cole running 59.5s, Alex 58.4s, Thomas 56.3s and Mehrdad 57.2s. Congratulations to Cole, Alex, Thomas and Mehrdad – the 2014 Provincial Champions in the midget men’s indoor 4x400m relay.

CALTAF captured the gold medal in both the midget men’s and midget women’s 4x200m relay. Our men’s team of Thomas Huard to JD graduate John Zeng (now of CALTAF’s Sprints and Hurdles Group) to Cole to Mehrdad placed 1st of six teams in 1:40.67s. The boys missed the provincial record of 1:40.44s, which has stood for 12 years, by 23/100ths of a second. So close! In winning the gold medal, the boys all ran personal bests: Thomas 24.9s, John 26.0s, Cole 25.2s and Mehrdad 24.5s. Well done Provincial Champions and gold medalists in the 4x200m relay – Thomas, John, Cole and Mehrdad!

Congratulations to our provincial silver and bronze medalists:

It was our bantam women’s 4x200m relay team of Jasper to Alex to Juliette to Katy who claimed the first provincial medal of the weekend for CALTAF – shortly after 9:00am on Saturday morning, when most of us were barely awake. The girls placed 2nd of six teams, finishing in 2:07.24s to claim the provincial silver medal. Congratulations to the 2014 provincial silver medalists in the bantam 4x200m relay – Jasper, Alex, Juliette and Katy. Well done ladies! 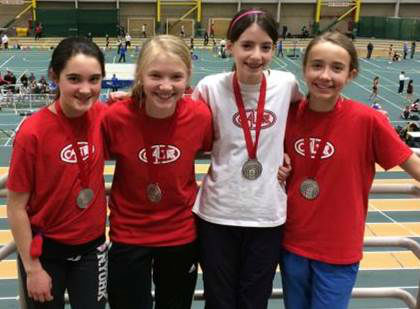 There was a sea of CALTAF singlets on the track for the midget women’s 4x400m relay, where CALTAF entered three teams. JD claimed two of the three medals, capturing both the silver and bronze medals. In a close fought battle for the win with the Edmonton Harriers, the team of Erika to Shaniah to Annika to Fiona placed 2nd in 4:25.15s – an especially impressive feat given that all four girls are first-year midgets. Erika got the team off to a quick start, running the 400m leadoff leg in 61.9s, an outstanding time for a first-year midget. Coach Blair wrote that, “The performance of the meet for me was Erika’s leadoff 4×400 leg. She took 3 seconds off her split from the Jack Simpson Open meet and was by far the fastest Caltaf midget girl. Her time is competitive with girls 2-3 years older than her and bodes extremely well for her 300m going forward.” Coach Blair and I were also impressed with Fiona’s effort as the anchor, with Coach Blair commenting that, “Fiona bounced back from a tough Saturday to run a nice PB in the 600m and followed that up with a courageous anchor leg in the 4x400m.” Well done Erika, Shaniah, Annika and Fiona – provincial silver medalists in the 4x400m relay. 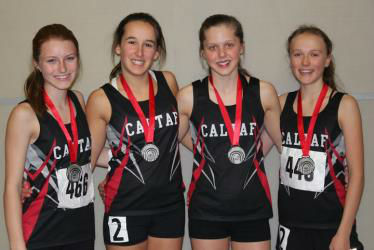 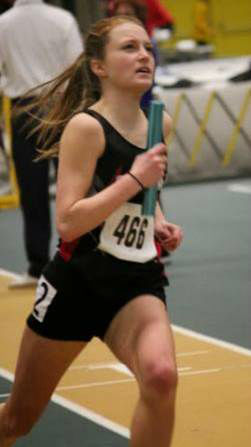 Fiona running the anchor in the 4x400m

In that same midget 4x400m race, the team of Amelia to Jasper to Vienna to Amanda finished 3rd in 5:01.82s. Coach Blair and I were especially impressed with Jasper who, although still a bantam, agreed to run up on the older team when we were short a midget athlete. Jasper looked right at home amongst the midgets, running her 400m leg in an impressive 1:16.50s. Coach Blair also commented about Amelia’s weekend, writing that, “Amelia seemed very confident and composed and she ran well as a result.” Congratulations to Amelia, Jasper, Vienna and Amanda, provincial bronze medalists in the 4x400m. 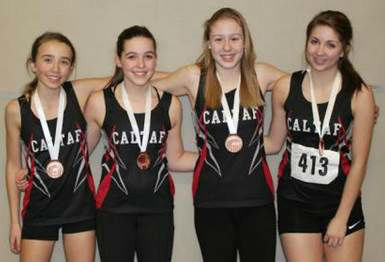 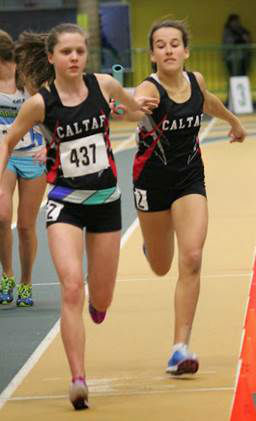 Erika to Shaniah in the 4x400m, A great exchange!

In the midget men’s medley relay, the team of Mehrdad to Thomas to John to Cole  placed 2nd of six athletes in 4:06.29s, capturing the provincial silver medal. In that same race, the team of Evan to Thibaut to Scott to Alex just missed the medals, finishing 4th in 4:31.73s. Well done medley relay runners!

In the midget men’s 4x400m, the team of Evan to Yohan to Thibaut to John Zeng captured the bronze medal, finishing 3rd in 4:12.95s – this despite the fact that Thibaut and Yohan are both first-year midgets and that Evan, Yohan and Thibaut are all new athletes, who were competing in their first out-of-town meet. Congratulations to the provincial bronze medalists in the midget 4x400m – Evan, Yohan, Thibaut and John!

Congratulations to our EMOC medalists:

First-year midget Annika captured the EMOC bronze medal in the 1200m, where she finished in a 5 second personal best 4:11.05s. Well done Annika!

Coach Blair noted that “Yohan and Evan have great attitudes and stand out in that group of boys”. Despite being a new athlete, Yohan was the epitome of organization this weekend, warming up when he needed to and staying on top of his busy schedule. Coach Ed noted that Yohan has very strong legs and is a talented jumper. In fact, in his first high jump competition, Yohan won the EMOC bronze medal, clearing 1.35m to finish third.  Yohan was also 5th of ten athletes in the long jump, where he cleared 4.40m. Yohan was a also member of the bronze-medal-winning 4x400m relay, where he ran the second leg. Well done Yohan – very impressive results for a new athlete and first-year midget. Although a new athlete, Evan is a leader in the group. He is perpetually cheerful and a hard worker. His work ethic ensures that he continues to improve. Evan recorded a big PB in the 60m and ran a strong leadoff leg for the bronze-medal-winning midget men’s  4x400m relay team. Well done Yohan and Evan – you are welcome additions to the JD Group.

Adeem was the only competitor in the midget men’s shot put, but he earned his gold medal with a throw of 9.32m, a personal best of 1.21m. Well done Adeem!

Other highlights of the meet:

Coach Ed was impressed with the depth of the midget girls’ sprinters, and Coach Blair thought that the midget girls’ 60m, “might have been the most competitive event at the meet.” There was a large and talented field of forty athletes. In the heats, Hanna, Amelia, Erika and Adrienne all ran personal bests. Five of our athletes – Grace Chalmers, Vienna, Hanna and first-year midgets Denise and Erika – made it through the heats to qualify for the 60m semi-finals.  Amelia just missed qualifying for the semi-finals by 7/100ths of a second. In the semi-finals, Grace (8.51), Vienna (8.61) and Erika (8.50) each ran personal bests, and Grace and Erika qualified for the final.  In the final, Grace ran another personal best 8.47s and Erika matched the 8.50s personal best that she had run in the semi-final to finish an impressive 5th and 7th of nine finalists respectively. Well done sprinters! 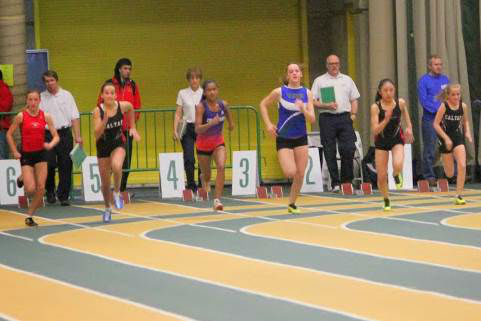 It seems that we have a new coach in the JD Group. J On Saturday, Adrienne was overheard by Coach Blair explaining perfectly to Paige, Amanda and Tyra how to run a 300m. All three girls then went on to run personal bests in the 300m. Well done Adrienne – clearly you were listening attentively when we talked about floating in a recent training session.

The coaches witnessed so many acts of good sportsmanship this weekend. Here are a few that come to mind.  Although pulled out of the weight throw competition rather suddenly to run the medley relay, Hanna took the time to shake the hands of the weight throw officials. At the crack of dawn on Saturday morning, while the rest of us were still bleary eyed and struggling to wake up, Jasper was observed cheering on the young peewee athletes. High jump volunteers looked pleasantly surprised when Grace Lew helped them to pick up the pole after she knocked it down during the high jump competition. Grace Lew, Alex M and Juliette were at the finish line to congratulate Shaniah, Kamila and Annika after their 1000m. Evan shook my hand and wished me good morning first thing on Saturday – such a lovely way to start the day! Yohan, the coaches discovered, has impeccable manners and is an easy conversationalist – a pleasure to travel with.

Coach Ed wrote, “I was happy with how willing people were to run relays and how much fun they had doing it too.” I think the photos speak for themselves! 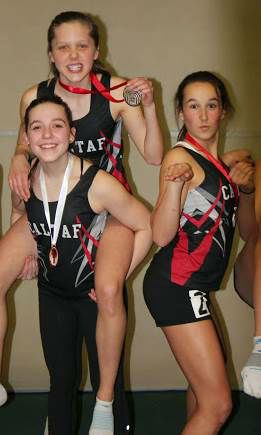 Vienna, Shaniah & Erika after the 4x400m

At her first out-of-town meet, Rebecca ran a 3.5s personal best in the 1500m, and ran strong legs in the youth 4x200m and 4x400m, where she ran with the older athletes in CALTAF’s high-school distance group. Well done Rebecca! 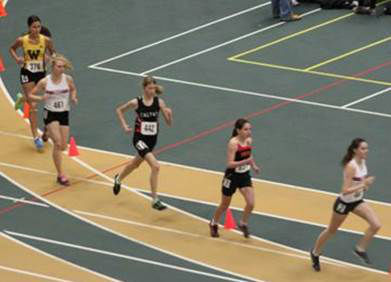 I could not help but notice that, once again, some of the best warm-ups and cool-downs were completed by our youngest athletes – Juliette, Katy, Alex M, Matthew and Yohan in particular. 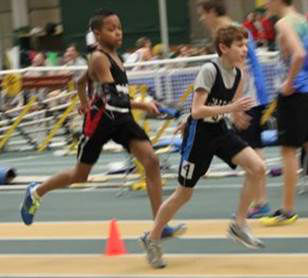 Yohan to Matthew in the medley relay 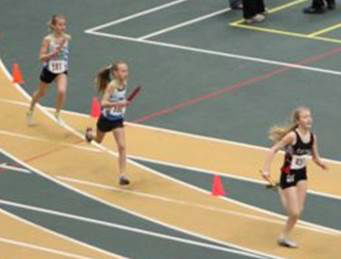 Alex leading in the relay

The athletes and coaches would like to offer our sincere thanks to Tim Fowlow and Derek Strauss, who gave up  their weekends to accompany the team to Edmonton as chaperones. We are most grateful!

Thank you also to Kellie Gray, Luis Leote and Isabelle Villemure for the lovely photos that are included in this email.

Finally, thank you to the families who traveled to Edmonton to support the team. The athletes and coaches are most grateful for your continued support.