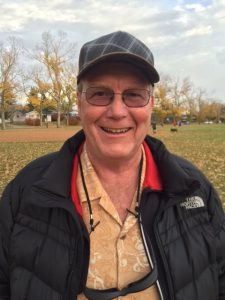 Bill is an original Calgarian who attended high school and junior college in Calgary but later moved to British Columbia to attend the University of British Columbia (UBC), where he received a Bachelor of Physical Education degree, a Master of Physical Education degree, as well as his teaching certificate. Later he also achieved his NCCP level 3 certification.

After graduating from university, he taught elementary school for 36 years and started coaching with the Vancouver Olympic track and field club. During this time he also became involved with the University of British Columbia track and field program as an assistant coach for 34 years.

He decided in 2015 to return to his roots in track and field and began coaching with Caltaf in the junior development program.

In the fall of 2017 he moved from the Junior Development Program to coach more senior athletes in Caltaf. He is now coaching a group of under 18 Sprint, Hurdle, and Jump athletes.

Bill’s coaching philosophy goes beyond coaching just the physical athlete. To succeed as an athlete one must learn to overcome adversities as well as to learn to thrive with their successes. He sees his role as assisting the athlete to become a better athlete and to learn life skills through training and competing.