Congratulations to the thirteen JD athletes that travelled to Sherwood Park this weekend to compete in the Provincial Championships. Coach Michelle and I were very impressed with the performances and the maturity displayed by Grace C, Vienna, Anna, Hanna, Amelia, Erika, Shaniah, Levi, Cole, Dylan, Alex O, Evan and Adeem. Eleven out of the thirteen JD athletes won at least one medal, and ten of thirteen recorded at least one PB. Every single JD athlete had at least one or the other, which is all a coach can ask for. Great work!

The girls 4x100m relay team – Hanna, Grace, Vienna and Erika about to go to work.

A few highlights that stood out to me:

Grace C had an outstanding meet and set a great example for the group, showing all the qualities that make her a strong team captain. She ran a PB in her 100m heat to make it into the A final, where she ran another PB to finish 6th in one of the most competitive events in the meet. She won a silver medal anchoring the 4×100 relay and ran another PB in the 200m. Finally, she and Vienna bravely agreed to run the youth 4x400m at the last minute to ensure we could still field a team given some injuries to older athletes. Despite some frayed nerves, both girls ran a great race, with Grace catching up to and passing one of the youth athletes she was running against. Awesome job Grace and Vienna!

The performance of the meet from our group has to go to Dylan, one of  JD’s newest athletes. After running the 100m, 100m hurdles and the 4x100m (where he won a gold medal) on Saturday, he realized he didn’t have any events on Sunday and asked me to enter him in long jump so he would have something to do. Despite having a sore hip and having never competed in long jump outside of school meets, on his second jump of the competition he launched himself 5.79 metres, winning the gold medal and setting a new meet record. With that jump, Dylan is now ranked #2 in the province in long jump and has qualified to compete at Legion Nationals in that event. Wow! 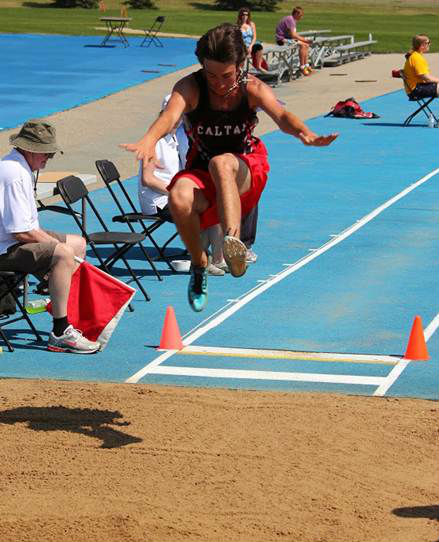 JD captain Cole had a great meet. He was a member of the gold-medal 4x100m on Saturday but it was on Sunday that he really shone. Despite almost missing his javelin (Coach Michelle told me he did his first throw in his socks!), he threw a PB 39.19m and won the silver medal. He then went into the 800m and ran a two second personal best to qualify himself to compete at Legion Nationals in that event. Cole knew from the beginning of the year that he wanted to run 2:08 or better in the 800m, and he finally did with his 2:07.56 on Sunday. All that training has paid off!

JD athletes brought home a complete set of medals from the 1500m steeplechase. Shaniah and Anna won the gold and silver respectively in the girls’ race, and Evan outleaned an athlete from Medicine Hat to win the bronze in the boys’ race. Evan told me that his bronze was the first medal he has ever won in an individual event, but based on the way he is running, it will not be the last! Shaniah just missed breaking her own provincial record in the girls’ race, despite having run a 1200m earlier in the day and 30 degree heat that was less than ideal for distance running. Way to go steeplechasers! 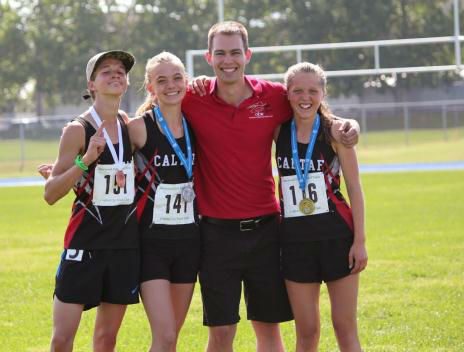 Shaniah, Evan and Anna with their steeplechase medals and a happy coach!

Adeem and Hanna both had some nice results in the throws. Adeem threw a big PB in javelin and another in discus and Hanna had a PB in shot put in addition to her gold medal in hammer and her discus silver. Coach Michelle had a busy weekend keeping track of all the achievements in the throws.

JD’s newest athlete, Levi, acquitted himself very well in the100m and 200m and won a silver medal in the 4x100m relay despite meeting his teammates for the first time about 30 minutes before the race! 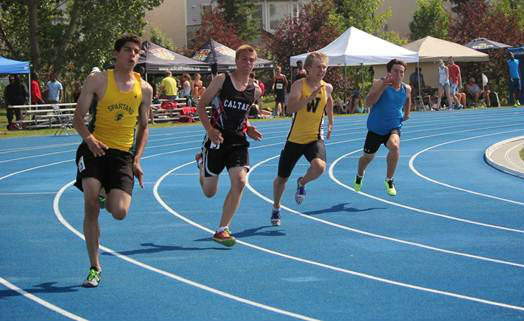 Erika won three medals (4x100m, 300m, 200mH) to tie with Hanna for the most in the group. Very impressive for a first-year midget! 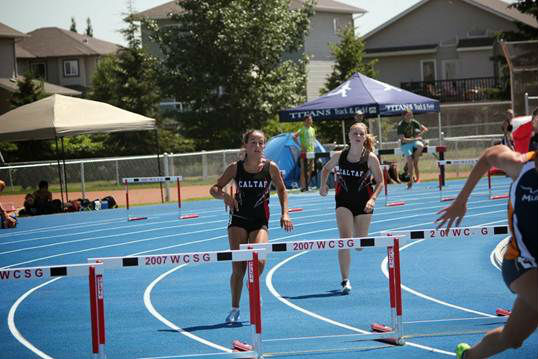 Erika and Amelia in the 200mH

For those continuing on to the WCC, ASG or nationals, Robin and I will see you at practice. For the rest of you, have a great summer. Many of you will move to a new group in the fall, and you will be missed. It has been my pleasure to coach all of you this year.

Thanks to Kellie Gray for the photos.