Six bantams, Coach Ed and I had a great weekend in Edmonton. It was warm, we did not get rained on, there was little wind, and the athletes – Maddie, Penny, Katy, Matthew, Alex Matsuoka and Jasper – took full advantage and recorded some outstanding results. It was a very memorable way for the bantam athletes (2001/2002) to end the year. 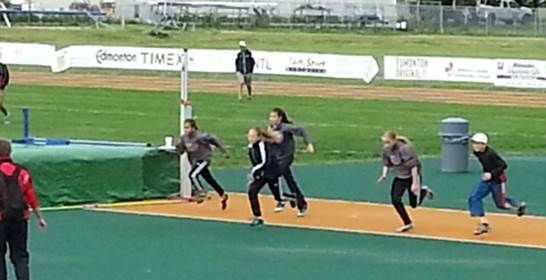 Some of the most impressive personal best performances included:

Of the five athletes who were able to compete on both days – Maddie, Jasper, Matthew, Alex and Penny – all of them took on the challenge of competing in all eight events – the 80m, 800m, long jump and ball throw on Saturday, and the 150m, 1200m, high jump and shot put on Sunday. Most were reluctant to try the 1200m but, in the end, they all competed in it and ran it very well – Coach Blair would have been very impressed. By competing in all eight events, these athletes are now eligible for an Athletics Alberta Award. Winners will be announced in the Fall.

Here are some of my favourite memories from the weekend:

The JD athletes had great fun mingling with the Olympic athletes, who were there to compete in the Edmonton International Track Classic (EITC). The JD athletes collected the Olympian’s signatures on their competition bibs. 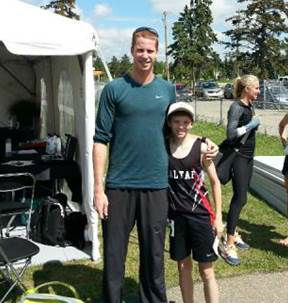 Coach Nicola would have been so impressed with Jasper’s high jumping. Jasper won the high jump competition, clearing a 3cm personal best 1.45m to place 1st of thirty athletes. To give you a sense of just what impressive jumping that is from a bantam (2001) athlete – 1.45m was the qualifying height for midget women (1999/2000) to qualify to compete at Legion Nationals in Langley in August. Well done Jasper – Provincial Champion and gold medallist in the high jump!

First-year bantam Matthew ran so well on the weekend. On Saturday, in the 800m, Matthew ran a very strategic race, coming on strong in the final 300m to move up several places and finish 6th of twenty-four athletes overall in 2:33.67s – a personal best of 4 seconds. The following day, in the 1200m, Matthew again ran a very clever race, finishing with a strong kick to the finish to place 8th of twenty-one athletes in 4:10.55s – a personal best of 8.20s. Well done Matthew – what a great end to your outdoor season! Coach Blair will be very happy with those races.

In the 80m, Penny captured the provincial silver medal, placing 2nd of thirty-three athletes in a personal best and very impressive 11.33s. Despite being only a first-year bantam, Penny is now ranked 2nd in the province in the bantam 80m. Jasper also ran very well in the 80m, finishing just off her personal best in 11.61s and placing 6th overall. Based on their results in the 80m, both Penny and Jasper were invited to participate in an invitational 100m, which was held on Sunday afternoon, just after the opening ceremonies of the Edmonton International Track Classic (EITC). It was good fun watching the girls warm up surrounded by the security guards who were at the track to protect the Olympic athletes. Despite having already competed in eight individual events and two relays, both girls ran a very strong 100m, amidst cheers from a very appreciative crowd (and their proud coaches! ). 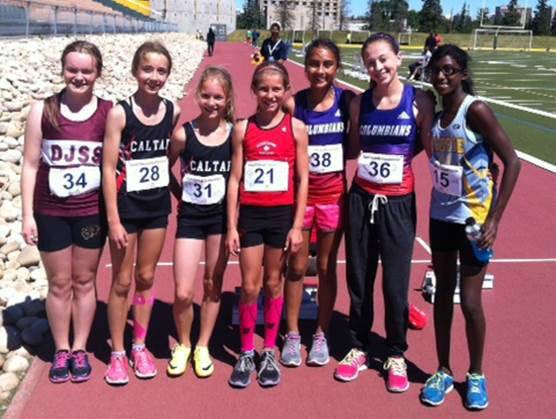 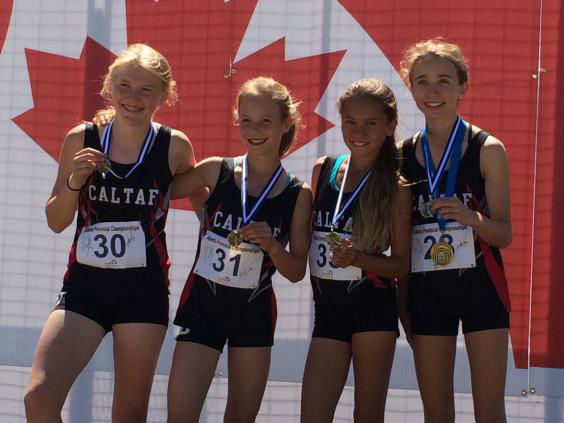 In the 4x100m, I knew that the girls would be up against some tough competition from a team of four 2nd-year bantams from the Edmonton Columbians. I warned Penny, Maddie and Jasper that they needed to take the pressure off Alex, who was running the anchor, by getting her as big a lead as possible. Well, the girls certainly heeded my advice. Penny flew out of the blocks and had the team in the lead by the first exchange. Jasper ran the second leg and added to the team’s lead to such an extent that Coach Ed, who was assisting with the timing, told me later that the timers who had been brought in from the US to time the events at the Edmonton International Track Classic (EITC) even commented on how fast the girls were. Jasper passed off to Maddie, who ran a very strong 3rd leg and increased the lead, and then passed off smoothly to Alex who then flew to the finish the line, assuring the team of its victory. Given that the team was thrown together at the last moment and that they had not had the opportunity to practice their exchanges until the morning of the race, it was a very impressive race, with remarkably fluid exchanges. The girls finished 1st of eight teams in 55.99s – a very impressive time for bantams. It is a great pity that Athletics Alberta does not keep records for bantam athletes, I suspect that 55.99s would have been a provincial 4x100m record. Going back in the provincial rankings for as far as the 4x100m results are available, I could find no team who has run faster.

In the medley relay, the girls were once again up against a team of four 2nd-year bantams from the Edmonton Columbians who, after placing 2nd to CALTAF in the 4x100m, were determined to beat our girls. This time, I warned Maddie, Alex and Penny that they needed to take the pressure off Jasper, who was running the 400m anchor. I need not have worried. Penny, who ran the 1st/200m leg, had made up the stagger before she passed off to Maddie. Maddie, who has mastered the art of running the corners, increased the lead and then passed off to Alex who, with some impressive sprinting, kept the team in front of the Columbians. Jasper had about a metre lead going into the final 400m leg when she received the baton from Alex, and had to work hard against a very determined Columbian athlete to assure the CALTAF team of the gold medal. Well done ladies! Very impressive exchanges and running! The team finished 1st of five teams in 2:04.49s – again, a very impressive time for a team of two 1st-year and two 2nd-year bantams.

On Sunday, after capturing the provincial silver medal in the 80m on Saturday, Penny placed 3rd and captured the provincial bronze medal in the 150m with a personal best 21.13s, a remarkable feat for a first-year bantam in such a competitive field of thirty-one athletes. Then, just to demonstrate what an all-round athlete she is, Penny captured the silver medal in the ball throw, her impressive throw of 36.22m placing her 2nd of thirty-two athletes. What a weekend for Penny – 2 gold medals in the 4x100m and medley relays, 2 silver medals in the 80m and ball throw, a bronze medal in the 150m, 6th of 26 in the 1200m, 9th of 30 in the high jump, 11th of 28 in the 800m, and 15th of 33 in the long jump. Remarkable! 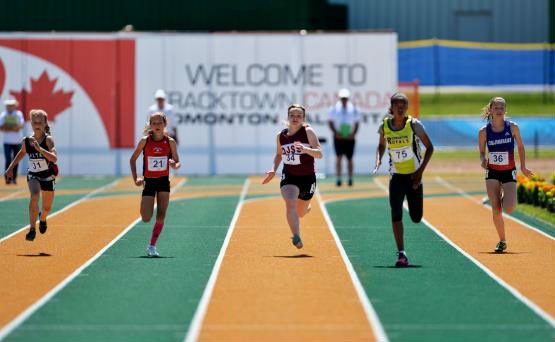 Penny in the EITC invitational 100m

In the 1200m, the girls were very nervous prior to the race but then ran so well. Jasper and Penny were seeded into the fast heat, and both girls rose to the challenge of the quick pace. Jasper placed 5th of twenty-six athletes overall in 4:16.00s, while first-year bantam Penny was just behind her, finishing 6th in 4:16.36s. Clearly not one to be easily intimidated, Maddie ran an amazing race, gong out hard in the second heat and taking the lead early in the race. Maddie finished 2nd in her heat and 11th of twenty-six athletes overall in 4:25.23s. First-year bantam Alex also ran very well in the final heat, finishing 16th overall in 4:46.61s. Well done ladies! Coach Blair will be so impressed – I see more distance races in your future! 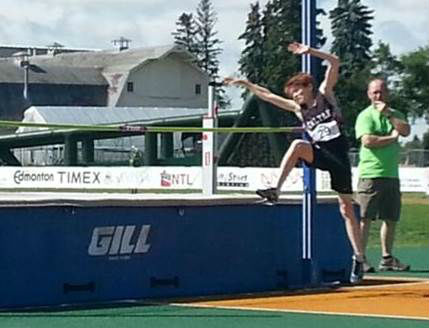 Matthew in the high jump – great knee drive and use of arms!

Although she had not run the 800m previously, Penny ran a very strong race, finishing 11th of twenty-eight athletes in 2:41.90s. Coach Blair take note – although I didn’t get it in writing, both Penny and Jasper admitted to enjoying the 800m after they had run it.

Coach Michelle would have been happy with the results in the shot put. First-year bantam Alex was our top finisher, placing 9th of twenty-nine athletes with a throw of 5.81m. Jasper added another 28cm to her personal best, finishing 18th with a throw of 5.20m.

All in all a wonderful finish to the outdoor season for the bantams. A sincere thank you to the Molloy, Crockford, Matsuoka, Fowlow, Thirnbeck and Morgans families for giving up a summer weekend to transport their athletes to and from the meet. I am most grateful for your continued support. Thank you also for your assistance during the meet – the athletes and I are most grateful. Thank you to the Fowlow, Matsuoka and Thirnbeck families for the photos.