Many thanks to the athletes and parents who sent me some fabulous photos from the weekend – Sarah Choate, Ward Rosin, Vaide Hasani, Kellie Gray, Mariann Sharp and Katerina Ocaskova. I have used some in this email and will include the rest in the PowerPoint presentation that will be shown at the 2013-2014 CALTAF Awards Gala on Friday 3rd October – please mark your calendars (~5 to 9pm– details will follow). 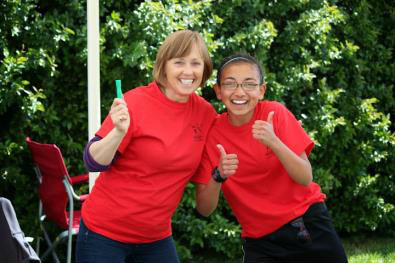 Thank you also to the parents, grandparents, and siblings, who braved the miserable weather to volunteer at the meet and/or cheer for the team. Your continued support is very much appreciated by the athletes and coaches. A special thanks to the parents who provided the lunches for coaches, officials and volunteers. I have never eaten so well at a track meet. 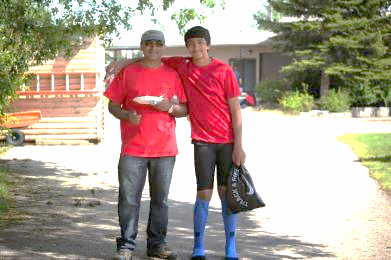 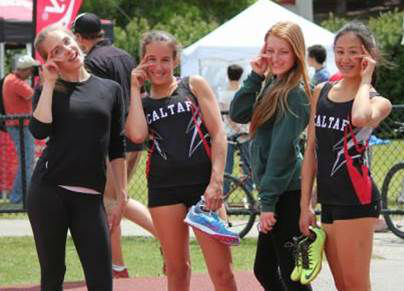 Hanna Erika Fiona & Denise – hamming it up for the camera 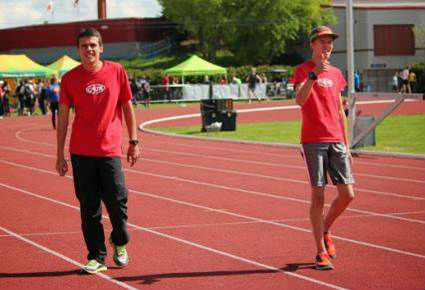 Alex & Evan – trouble on the track!

Among those 48 personal bests, there were some stand-outs:

Pity I did not have the opportunity to swing past the discus cage to witness the carnage to the personal bests that went on all weekend. There are a long list of remarkable personal bests in the discus. Katy led the way, adding an impressive 3.60m to her previous best. Eden added 3.38m to her personal best, Thibaut added 2.59m, Paige added just shy of one metre, Hanna 1.13 metres, Scott just shy of a metre, Adeem 1.77m and Matthew 36cm. Phew! Well done throwers! Perhaps you were taking advantage of what little sunshine we enjoyed all weekend? Hanna’s throw of 28.61m earned her the gold medal for midget women, and qualified her to compete as a member of Team Alberta at the Western Canadian Midget and Youth Championships in Saskatoon and at the Alberta Summer Games. 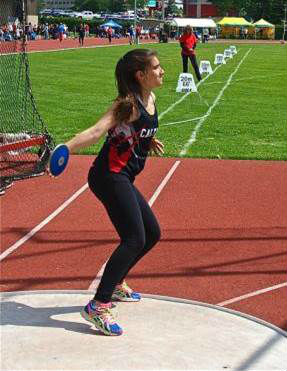 JD captain Cole added an impressive 2.96m to his PB in the javelin. Cole’s throw of 38.08m earned him the bronze medal and met the qualifying standard for both the Western Canadian Midget and Youth Championships and the Alberta Summer Games. 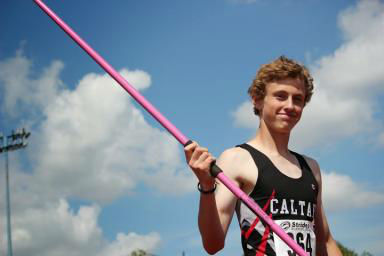 Despite strong head winds and puddles on the track, JD captain Grace ran personal bests in both the 200m heat (27.58) and 200m final (27.53) to finish 1st of the JD girls and place 9th overall in a very competitive field of forty-one midget athletes. Grace met the standard required to compete at the Alberta Summer Games in all of her events – the 100m, 200m and long jump. 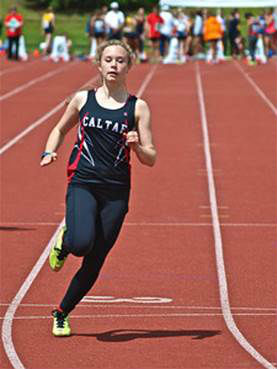 JD captain Grace on the track

Hanna added 3.33m to her PB in the hammer throw, winning the gold medal with a personal best 44.43m throw. Hanna’s throw qualifies her for the teams which will represent Alberta at Legion Nationals in Langley in August and the Western Canadian Midget and Youth Championships in Saskatoon in July. Hanna is now ranked 1st in the province in the hammer throw, 2nd in the discus and 5th in the shot put. 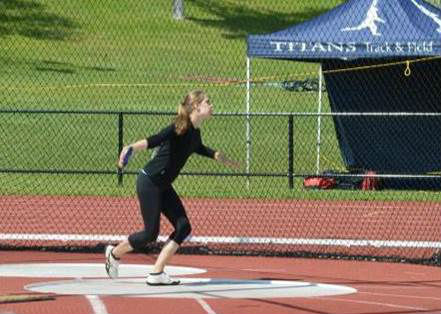 First-year midget Erika ran a personal best 42.95s in the 300m, capturing the bronze medal and meeting the standards required to compete as a member of Team Alberta at the Western Canadian Midget and Youth Championships in Saskatoon, and as a member of Team Calgary at the Alberta Summer Games. Erika’s time also met the standard needed to compete as a CALTAF athlete at Legion Nationals in Langley in August. Erika is now ranked 5th in the province in the 300m, 2nd of the first-year midgets. 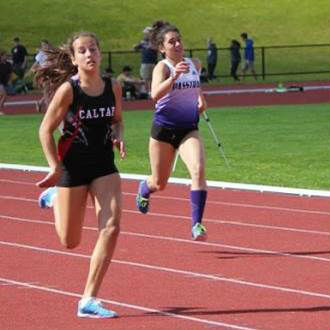 Bronze medallist Erika in the 300m 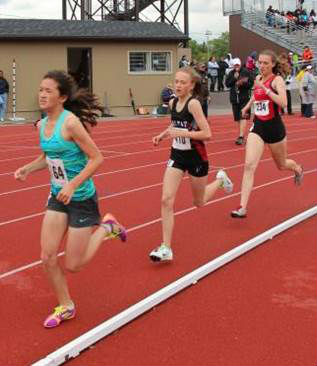 First-year midget Annika in the 800m 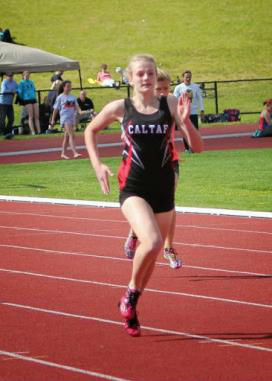 Despite being under the weather, Anna slashed an amazing 17.87s off her PB in the 2000m. Anna ran the standard required to compete in the Alberta Summer Games in both the 1200m and 2000m. 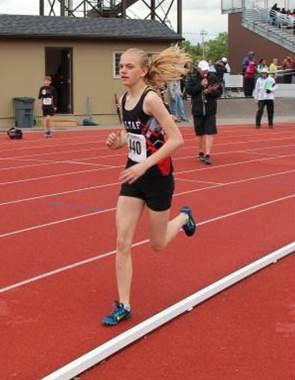 Bantam Jasper added another 2cm to her PB in the high jump, clearing 1.42m to finish 3rd of twenty-five athletes. Jasper’s 1.42m jump is just 3cm shy of the standard required for older midget athletes to compete at Legion Nationals. Impressive jumping Jasper! Jasper is now ranked 3rd in the province in the high jump. Jasper was JD’s top finisher in the overall bantam competition on Sunday, placing 7th of thirty-nine athletes with 13 points. In addition to placing 3rd in the high jump, Jasper was 2nd of thirty-five athletes in the long jump competition, where she cleared an impressive 4.14m. Jasper is currently ranked 1st in the province in the long jump. Jasper also demonstrated her speed by placing 5th of thirty-seven athletes in the 80m. 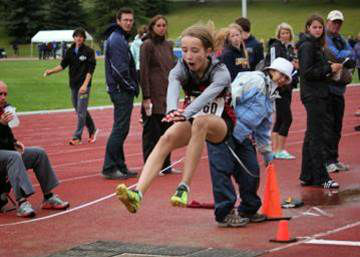 Jasper in the long jump – 1st in the province

First-year midget Skylar added another 20cm to her PB in the high jump, clearing 1.40m to finish 3rd of twelve athletes and capture the bronze medal. Skylar qualified to compete in the Alberta Summer Games in an impressive four events – the 80m hurdles, 200m, javelin throw and the high jump. 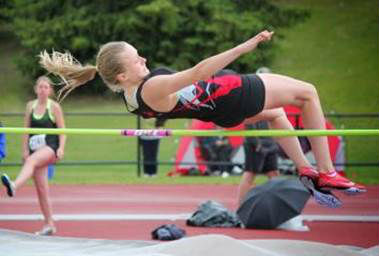 Skylar on her way to the bronze medal in HJ 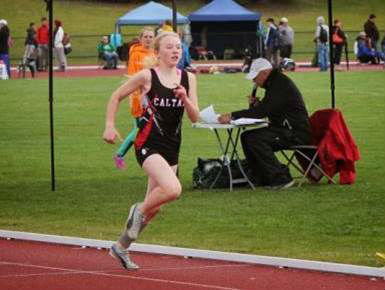 Dylan ran an impressive personal best 14.97s in the 100m hurdles, which qualified Dylan to compete as a CALTAF athlete at Legion Nationals and as a member of Team Calgary at the Alberta Summer Games. 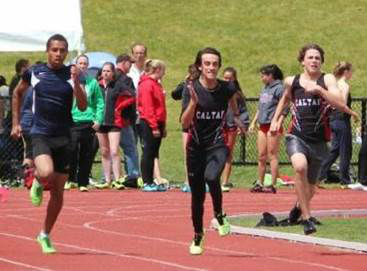 Dylan and first-year midget Scott in the 100m

First-year midget Scott was impressive in the throws over the weekend. In addition to his 89cm PB in the discus, Scott also added another 15cm to his PB in the shot put.

In addition to his 1.77m PB in the discus, Adeem also added another 80cm to his PB in the javelin, where he finished fifth.

In addition to the personal best performances, there were other highlights at the meet:

The 1500m steeplechase on Friday evening was great fun to watch. Although midget athletes run the steeplechase without the water hazard, there were plenty of water hazards on the track in the form of large puddles. Both the men and women’s races were run in a steady rain and cool temperatures, presenting plenty of challenges for the competitors. All of the JD athletes  – Shaniah, Liam, Alex and Evan– competed very well, with all four athletes meeting the standard required to compete at the Alberta Summer Games, and with Liam, Evan and first-year midget Shaniah also meeting the standard required to compete for CALTAF at Legion Nationals in Langley in August. Shaniah captured the gold medal for midget women. 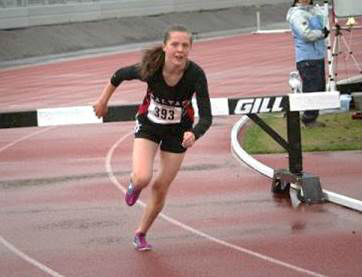 Gold medallist Shaniah in the 1500mSC

At this meet, several midget and youth athletes met the standard to compete at the Alberta Summer Games (ASG), the Western Canadian Midget and Youth Championships (WCC), and/or Legion Nationals as a member of Team Alberta or as a CALTAF athlete. Athletes who had qualified previously during the outdoor season are not included on this list.

Met a standard to compete at the ASG as a member of Team Calgary: 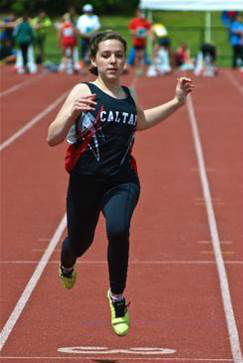 Met a Legion entry standard to compete at Legion Nationals in Langley in August as a CALTAF athlete: 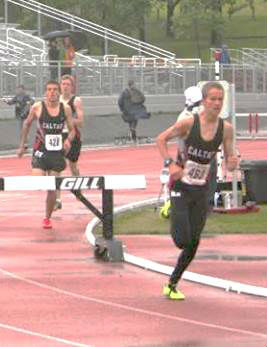 Met a standard to compete as a member of Team Alberta at the WCC in Saskatoon in July:

Met a standard to compete as a member of Team Alberta at Legion Nationals in Langley in August: 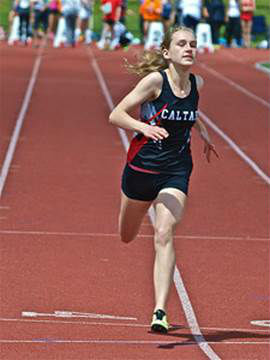 A lesson on how to intimidate a new athlete: allow them to attend one training session, then throw them in the challenging 100m in the most competitive meet of the season, where he/she is the youngest athlete amongst a field of very competitive athletes, and see how it goes. That is precisely what I did to poor Levi. Clearly not one to be intimidated, Levi rose to the challenge and finished in 12.06s, finishing 2nd of the 1998 athletes and 13th overall. Well done Levi!

In his first meet, new athlete Paul entered the 100m, 100m hurdles, discus and high jump, and demonstrated his versatility by competing well in all of the events.

JD’s youngest competitor, peewee Hanna had an outstanding weekend, winning the overall gold medal and placing 1st of thirty athletes on Saturday with 25 points. Hanna won the 60m in 9.21s, placed 1st in the ball throw with a throw of 28.84m, and finished 4th in the standing long jump, where she cleared 1.59m. The points accumulated for those three results earned Hanna the gold medal. Well done Hanna! 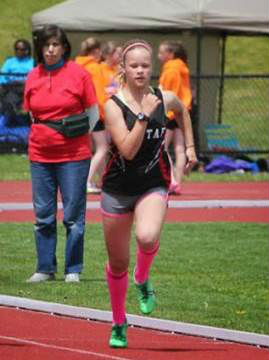 I was especially pleased with the bantam (2001/2002) athletes this weekend, who competed in many of the events offered to their age class and often for the first time. Eden, Allie, Maddie and Alex led the team, competing in all eight of the events offered to the bantams. For adventuresome Allie, six of the events  – 80m hurdles, high jump, discus, the 80m, shot put and the 600m – were all new to her; Alex tried the high jump, discus, long jump, 80m and 80m hurdles for the first time; Eden was new to 80m hurdles, the 800m and 600m; and Maddie had not competed in the 800m previously. Katy, who has demonstrated her willingness to try new events throughout the outdoor season, competed in all but the high jump, while Matthew competed in all but the 80m hurdles.

Despite a hectic competition schedule, the bantams competed extremely well: 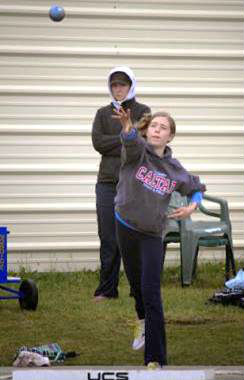 Allie in the shot put

One of my favourite races of the meet was Maddie’s 800m. In her first attempt at the event, Maddie went out fast and held the lead for the entire race, finishing 1st in her heat and 9th of thirty bantam athletes overall in 2:41.55s. Maddie also ran a very strong 600m, taking 6.41s off her personal best. I see distance in your future! J Just to demonstrate what a talented all-round athlete she is, Maddie also placed 6th of twenty-eight athletes in the 80m hurdles, and 9th of thirty-five athletes in the long jump. 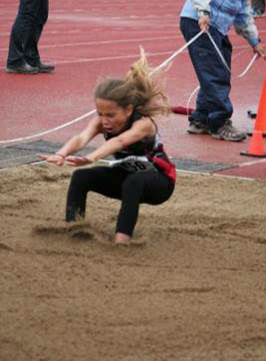 Maddie in the long jump

Although only able to compete on Sunday, first-year bantam Penny took full advantage and placed 8th of thirty-nine bantam girls overall with 12 points, 1st of the 2002 athletes. Penny earned those points by placing 3rd of thirty-seven in the 80m, 6th of thirty-five in the long jump, and 13th of thirty-four in the 600m. In the 80m, Penny finished in 11.50s, an impressive time for a first-year bantam. Penny was the only 2002 athlete to finish in the top ten in the 80m. 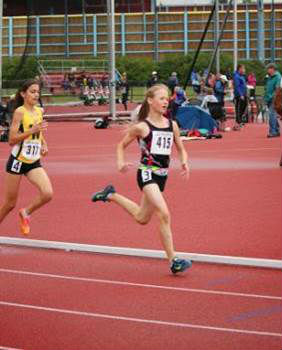 Penny sprinting to the 600m finish

Eden enjoyed her best meet of the year, looking especially impressive in the discus, 80m and long jump, where she recorded personal bests. However, what really got the coaches excited was Eden’s performance in the 80m hurdles, where she looked very strong, especially given that it was her first attempt at the sprint hurdles. I see hurdles in your future! 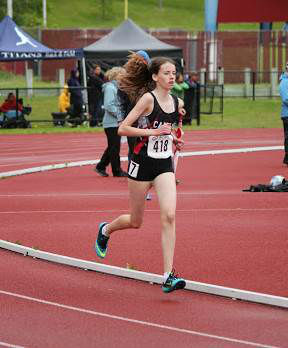 In her first meet, new athlete Rajpreet competed very well, placing 19th of thirty-nine athletes in the overall bantam competition on Sunday. Rajpreet was particularly impressive in the shot put, where she threw the shot 5.24m.

As he did at the New Balance meet in the 100m, bantam Kells once again demonstrated his speed on the track, running a very impressive 80m, and finishing 6th of thirty athletes in 11.30s. That time should rank Kells in the top ten in the province in this event. Well done Kells! 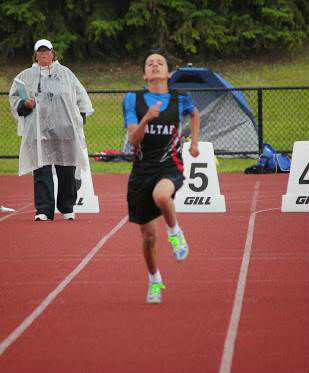 Kells is impressive in the 80m

In addition to his PB in the discus, Matthew’s best event of the weekend was the 80m, where he finished in a personal best 12.38s. Matthew also ran well in the 600m and 800m, placing 13th and 12th of thirty athletes respectively in those events.

Despite feeling decidedly under the weather and eventually withdrawing from the meet, Ryan did manage to add 5cm to his PB in the high jump, where he cleared 1.20m.

And finally…..not to be outdone by their children, the parents also ran very well in the Father’s Day Race. Now we know where the talent comes from! 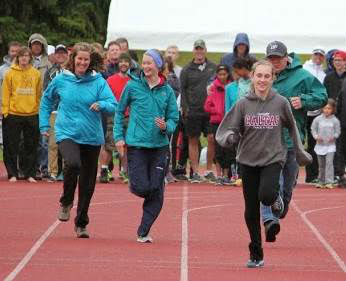 Congratulations to all athletes! Well done! Those are some very impressive results.