Caltaf is excited to announce that Samantha Read is the new Head Coach of our Junior Development Program! Samantha has most recently been the Head Coach for the Caltaf Cheetah Program and we are thrilled that she has agreed to move to JD.

Sam and her Cheetah coaching staff have had great success. In 2015 Sam was named Grassroots Coach of the Year by Athletics Alberta. She is very proud of the growth of the Cheetahs program and seeing the sea of Red Cheetah t-shirts at all the Meets. She is also very proud that there were 12 Cheetahs Nominated for the 2015 Athletics Alberta Awards.

Sam was most recently named the Head Coach for the Zone 3 Summer Games Team. Sam continues on with her coach’s education and is now attained her NCCP Level 2 and is currently working on her Level 3.

Please join us in welcoming Sam in her new role! 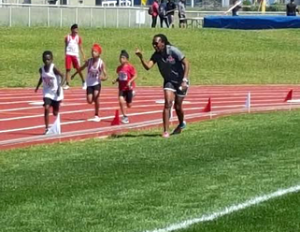